The disappearance of a 22-year-old woman sparked national interest, in large part because of the online sleuthing of amateur detectives.

Hundreds of thousands of people are reported missing in the United States every year. But it’s rare for a single case to capture the public’s attention — and galvanize individuals to take action — as the disappearance of Gabrielle Petito has.

In July, Ms. Petito, 22, embarked from New York on a cross-country road trip with her fiancé, Brian Laundrie, 23. As they made their way out West in a white Ford van, the couple posted photos and videos of their journey on Instagram and YouTube. Then, on Sept. 1, Mr. Laundrie returned from the trip alone. Ten days later, Ms. Petito’s family reported her missing.

The case has become a national sensation, in large part because of the awareness generated by people who are watching it unfold on social media. Each new development has been followed by flurries of explainer posts and videos from would-be detectives on TikTok, Instagram and Twitter, who have seen their follower counts balloon. Theories have been debated and debunked. And an influencer couple may have helped locate Ms. Petito’s remains.

Paris Campbell, a comedian and writer, took up the case on social media early last week, when interest in the case was nascent. She first read about Ms. Petito in the Daily Mail on Sept. 13 but hadn’t seen much about the story on social media.

As a new mother, Ms. Campbell, 28, was compelled to use her platform (around 150,000 followers on TikTok at the time) to try and reunite Ms. Petito’s parents with their daughter.

Her first TikTok about Ms. Petito featured a “Missing” poster she’d seen in an article about the young woman’s disappearance. “Screenshot it, share this,” Ms. Campbell says in the video. “This girl is actively missing.”

In the days that followed, Ms. Campbell posted about 40 videos including news updates and analyses of Ms. Petito’s 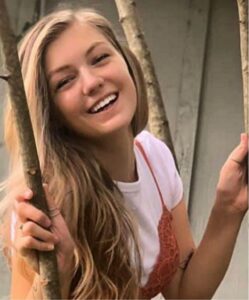 and Mr. Laundrie’s Instagram feeds. One commenter, who identified herself as Ms. Petito’s cousin, wrote that the Petito family appreciated the attention she had paid the case and hoped she would continue.